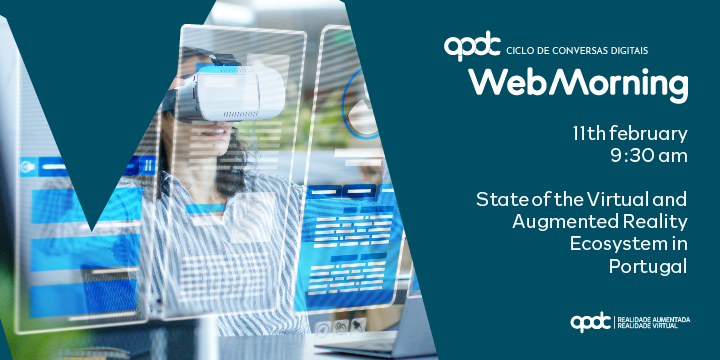 State of the Virtual and Augmented Reality Ecosystem in Portugal

Portugal has a huge potential when it comes to the development of offerings based on immersive technologies. The virtual and augmented reality ecosystem is a reality and continues to grow, promising truly transformative experiences at all levels and the development of innovative offerings. And the arrival of 5G even promises a new era for people, society and the economy. In this APDC WebMorning, the market opportunities and challenges were discussed.

In 2019 the number of companies in the virtual and augmented reality ecosystem was already 64 organizations and continues to grow sharply. The accounts are from VR/AR Association Portugal, an organization created in 2017 with the goal of developing dynamics and actions to create an ecosystem of immersive technologies in the country, and that in 2020 to integrate the APDC, through the creation of the VR/AR Section.

As Luís Martins, president of the AR/VR Section of APDC and Marketing Director of the IT People group, points out, there is a growing number of companies being created for this area, many of which focus on specific segments, such as tourism, health or industry. To show the reality of the sector in the national market, the VR/AR Association Portugal is preparing a report on the ecosystem of the country, which is intended to promote companies and organizations involved with immersive technologies and media. The conclusions of this work will be presented in the next months.

Considering that 2021 will be an important year for this market, with the arrival of 5G networks and the growing development of handsets and other equipment for virtual and augmented reality, Luís Martins believes that it is "a fascinating new world that is growing fast", defending that "Portugal can be an important player in this ecosystem. I see the future more and more 3D, which will transform the way we see the world. Immersive technologies can create and recreate the way people work together".

Essential for attracting new projects in this area, namely international ones, is the strong talent pool that the country has, as well as the quality of life, often considered by companies as a fringe benefit. The existence of an innovation ecosystem and multiple startups in this area is another fundamental attraction factor, as well as the fact that in many cases they work with the large multinationals present in the Portuguese market. "It's all about sharing knowledge. Cooperation is very important," assures the manager.

Therefore, he is convinced that Portugal "can be a gateway for companies from other geographies that want to be in Europe. Besides being a great country to test new ideas, ensuring advantages for companies that bet on immersive technologies.

The arrival of 5G networks will certainly contribute to strengthening the attractiveness of our market, not least because it will increase the number of cases of virtual and augmented reality, both for companies and consumers. Pedro Machado, Head of B2B New Business at NOS, has no doubt that the new mobile generation will be the basis of a profound transformation in the economy and in society, allowing the use of increasingly intelligent systems and the mass production of data processed in real time, through enormous computing power. New devices will also emerge that will create new forms of data consumption, which is why virtual and augmented reality "is so important and inevitable.

According to the head of NOS, "the industry is aware of the value and importance of immersive technologies and is preparing to make major investments in this area. 5G will transform our lives, the way companies work and society itself", through "increasingly personalized and real-time experiences".

Pedro Coelho, HP's Area Category Manager, highlighted the importance of the new headsets, which will open space for transforming experiences in areas such as education, design and gaming. This is a major area of focus for HP, which is developing devices for the virtual and augmented reality ecosystem. "The next wave of engagement is personal and human, even when it's technology-enabled," he says. Areas such as training, collaboration, and wellness are among those cited by him as having enormous potential.

One of the projects that have just settled in the national market is Satore Studio, a company created about 10 years ago for design, experiences and entertainment. According to Tupac Martir, founder and Creative Director of Satore Studio, the national market was among the many options for new locations under analysis. But the Portuguese talent pool was decisive to come to Lisbon, because more than bringing people, the goal was to hire new ones for the team.

The manager also emphasizes the existence of a very attractive immersive technology ecosystem, as well as the country's quality of life. And he is convinced that there are huge potential and multiple opportunities for experimentation and creating solutions that can be sold out there. "There is no reason not to be here," he concludes.
PROGRAM
9h30 Welcome, Sandra Almeida - APDC
9h35 VR/AR Ecossystem Presentation
Numbers and characterization of organizations and professionals in the virtual and augmented reality market in Portugal
Luís Martins - Head of Marketing, IT People Group
9h50 Talks about the emergence of immersive technologies and their unexpected impact:
- How 5G expands Virtual and Augmented Reality cases for businesses and consumers, Pedro Machado - Head of B2B New Business, NOS
- How HP's new headsets make room for transformative experiences in Education, Design and Gaming, Pedro Coelho - Area Category Manager, HP
- The attractiveness of the Portuguese immersive market, Tupac Martir - Creative Director of Satore Studio
10h15 Closing